The pap smear test was developed in the 1950s and has led to a dramatic reduction in cervical cancer. Pap smear screening is for women who are entirely asymptomatic.  If you have any symptoms that could be suggestive of cervical cancer such as bleeding after intercourse or bleeding between periods, then it is very important you are assessed by either a General Practitioner or a Gynaecologist.

The premise of the pap smear is that 5-10 years before the cervix becomes cancerous, there are small changes in the cells of the cervix that can be detected under a microscope. Human papilloma virus is now known to be the cause for these precancerous and subsequent cancerous changes.

The current pap smear screening program involves scraping cells from the cervix onto a glass slide which is then examined under a microscope for abnormality.  If there is an abnormal result, a procedure called colposcopy is then required (this is described below). This screening test misses about 10% of women who do have precancerous changes and therefore repeated screening every two years was recommended.

From December 2017 the primary screen for cervical cancer prevention will still be a sample collected from the cervix, but it will now be analysed for the presence of certain types of human papilloma virus, termed ‘high risk HPV’, and it is these women who will be usually referred to colposcopy.  The majority of women will have a negative test for human papilloma virus and the interval between screening will be extended to five years.  This is a significant change from previous practice but is based on sound scientific principles. 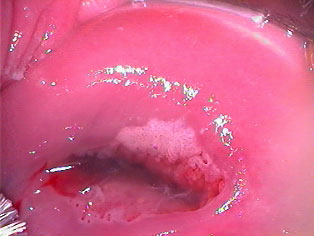 Colposcopy is a quick and simple outpatient examination of the cervix.  It takes approximately 5-10 minutes.  A speculum is inserted into the vagina (just as for a Pap smear) and a magnifying microscope is used to examine the cells of the cervix after the application of a weak stain which turns any abnormal areas white.  If such areas are seen, then biopsy is taken after injection of local anaesthetic.

If precancerous changes of the cervix are confirmed these may require removal in hospital under general anaesthesia.  Some very mild abnormalities, however, may simply be monitored over the next 6-12 months as these can frequently regress without treatment.